About the Ornithological Society of Japan (OSJ) 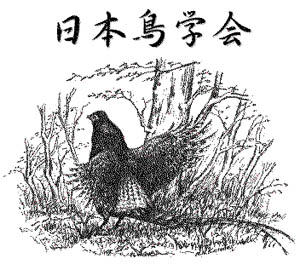 The Ornithological Society of Japan was established on May 3, 1912. Three years later, the Society launched its first official journal, ‘Tori’. Then, in 1986, Tori was renamed the Japanese Journal of Ornithology. The Society is the only ornithological society in Japan and currently has approximately 1,300 members. The main purposes and activities of the Society are the following:

1. Publishing two official journals, the Japanese Journal of Ornithology (in Japanese), and Ornithological Science (in English). Editions of both journals are released twice each year. Therefore, the Society’s major scientific communications to its members appear quarterly. Both journals include full-length original papers, short communications, review papers, book reviews and miscellaneous reports from the Society.

2. Holding an annual meeting. Participants can disseminate and discuss the results of their research in ornithology. Thus, these meetings facilitate the exchange of information among Society members.

3. Holding seminars and symposia. These sessions are usually open to both society members and the general public, and thus help disseminate information on current research in ornithology to a wide audience.

4. Publishing technical books and monographs. These specialist publications serve as a venue for the results and discussion of distinguished research. In the past, the Society has been involved with the publication of the following volumes: A Compendium of Ornithological Terms (2006, Dogura & Co., Ltd). The Checklist of Japanese Birds (revised 6th edition, 2000, Ornithological Society of Japan), Current Ornithology (1984, Asakura Publishing Co.), and The Birds of the South Kuriles (1979, Ornithological Society of Japan).

5. Maintaining strong contacts and continual involvement with appropriate academic institutions and organizations in Japan and abroad.

About the Symbol of the Congress 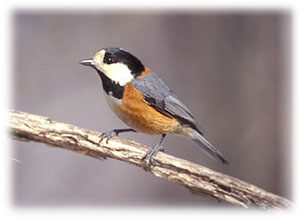 We would like to nominate the Varied Tit Parus varius as the symbol of the congress. This orange-breasted unique Parus species occurs only to the eastern parts of Asia, including Japan, Korea, Taiwan, and the east end of Mainland China.

Varied tits are popular among the Japanese people because of their charming appearance and lovely behavior. They prefer large broad-leaved forests for their breeding. Therefore, if you can hear the melodious song of a varied tit, it is a sign of bountiful forests in that area.

Varied tits have been present in eastern Asia for ages. This is probably why their distribution has extended to ocean islands, such as the Izu Islands, and land-bridge islands, such as Yaeyama Islands. The morphology and life history of the tits were altered when they expanded into these islands. These evolutionary phenomena are a major area of interest for ornithologists in East Asia.

We have nominated the varied tits as the symbol of the congress with the hope of spreading awareness about the importance of conserving the bountiful forests in Eastern Asia. We also wish to emphasize the importance of various habitats in East Asia as an evolutionary staging point of biodiversity in birds.